The review: Methyīs debut is a pretty standard old-school city map with some resemblance to the original Hollywood Holocaust levels. But it was Mikkoīs merit that the level made its way to the release. So, applauses and praises should come their two ways.
Duke starts in his luxurious room, watching a movie for adults and eating burgers from his own franchise until he realizes the aliens have come back to attack the Earth. Thereīs no time to search for keys and walk down the stairs to the street, so he resumes his neverending fight through his window.
The level is a 3DR-styled city with a good amount of locations to visit. Most of it looks a bit oversized, not only in terms of scaling but in terms of playable space. For example, there's a bar with pool tables, but it is as big as a soccer stadium, or so it looks by the fact that a large mirror extends its depth. Despite this little shortcoming, the overall design is solid and assorted with good trimming and nice shading. The layout should not present any trouble, meaning that it is always pretty evident where to go (with the small exception of one lock that may put some challenge in order to be found).
Enemy placement, and therefore firefights, is decent. But in my opinion it is here that people are going to notice the map has been put together with some rush. During my playthrough monsters didnīt impose a challenge because I could see them coming from far away, giving me enough time to take good cover and select the most suitable weapon for sending them to the afterlife. They also mostly came in small groups, or simply alone, making them easy to take on. We all know Duke's enemies are not smart enough to team up, but at least when together they can become some kind of a threat. Maybe what made this more evident is that weapons and ammo are plentiful. So, thereīs no need to spare bullets and, for tough enemies, thereīs always the Shrinker.

Conclusion: Once again, Mikko saves a gem from obscurity. He seems to team very well with these mappers that start but hardly finish anything. And, although the final product is lacking some polishment, It is still a solid release with a strong classic feel. The ten minutes it's likely going to take you will be well spent as things are well laid out and without complications. Easy firefights and puzzles, combined with nice looking scenarios are, to the less, interesting. 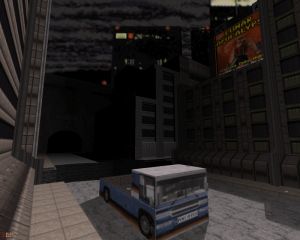 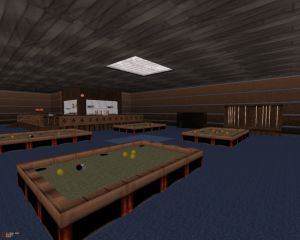