Description: Quakis, who's mostly known for NOT releasing anything, surprised the entire planet by finishing a brand new level in less than three days (or who knows - maybe he's been working on this one since the sweaty summer of -97?). It's a mix of hi-tech, city and alien.

Design: Type "dnshowmap" and be surprised! You basically travel from D to m with "uke Nuke" in between. The ending is a nice big Atomic symbol with a boss in the middle. The architecture is carefully detailed and well trimmed but it's way too cramped (even on MRCK's standards!) and the scale of buildings is about two floors. There's variety in terms of design but the gameplay is non-stop action without any surprises.

Gameplay: It's very straight forward with some keys to discover and monsters to shoot at. Nothing out of the ordinary or original. Quakis mentioned that the level was inspired by some ZDoom levels - no wonder. It really is quite Doomish with tons of small-scale rooms and corridors, filled with enemies and good architecture.

Conclusion: Hardly anything new, but it looks good and plays well and that's all there has to be. 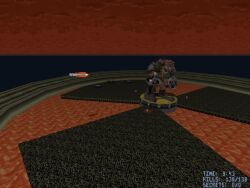 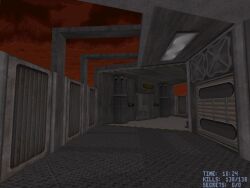