Description: First released level from Sewer dude and it's impressive because of its original blue-planet theme.

Design: Mostly detailed and original. Especially pipes & water/etc. tanks which are covered with texture no.829 are very impressive. Detailing is closer to levels like 'Bedrone' & 'Clearwater' than typical Bobsp style. Shadows are excellent and they're used often. Spritework is mostly good but some stairs use pipe sprite which looks poor. Anyways indoor & outdoor locations serve this blue planet theme very well.

Textures: Most of the textures are blue. Results are impressive. I'm a big fan of blue Duke stuff so this 'invention' really made the level look cool. Most used texture is that brown (now blue) pipe/tank/industrial texture number 829 which is mostly used for pipes. Sky texture is some rock which looks a bit poor. Anyways texture usage is clearly one of the highlights of this level.

Gameplay: Puzzles are a bit complex & enemy placement is at times a bit annoying. Especially the water tunnel area is a bit complex - there are buttons somewhere and you just keep travelling back & forth hoping that you find a way out or something. Sentry guns, Slimers & Octabrains are used very often and at times the placement of Sentry guns is annoying. They're placed so that when you enter some room they're right behind you. Huge number of Slimers is also annoying at times. There were also some bugs in the water tunnel section because I died a couple of times while trying to dive.

Innovations: Well it might not have dozens of new innovations but at least the theme is original and not just that same Bobsp style again. Doesn't really feel like a typical Duke level.

Conclusion: A bit complex and enemy placement is a bit annoying but mostly it's very enjoyable level with a very good looking blue theme. 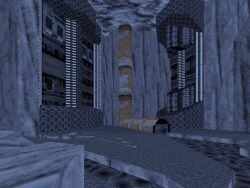 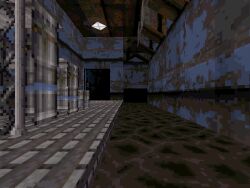