The review: This is a pretty interesting map, of the "looks good from the outside but hideous from the inside" variety. Set sometime in the future, the map has a cool background plot, clearly inspired by Blade Runner, and it's played out pretty well in the map. As said, the map's outdoor areas look good (even awe-inspiring) with some nice, gigantic futuristic buildings and generally good (outdoor) lighting. Indoor design is sloppy and there are maybe two locations that don't look downright bad. The map is very nonlinear. If you know the right route, you can get to the Nukebutton without having to visit many of the map's locations that the author surely intended you to visit, including ones that make sense from a storyline perspective. You're probably better off reading the readme file first to get a hang of the plot, then do what you're supposed to. It'd have been better if the author had constrained the player's movements a bit in order to prevent the player from picking his own routes and missing major parts of the map. The map is best played with v1.3d (i.e., the three-episode Duke3D) because of some new con stuff but Atomic Edition can probably handle the map as well (without the new cons though) but you need to rename vok files as voc and the arf file as art. 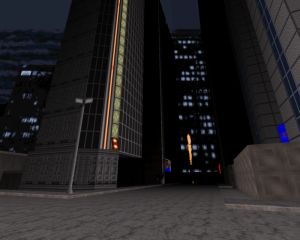 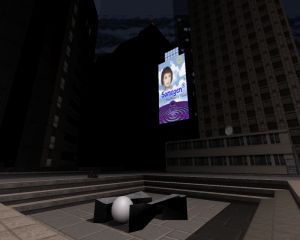