Design: Well, Taivo has "recently" released two types of maps: maps influenced by Merljin van oostrum's scary "Red" serie (see Dark Place 4 & 5) and maps influenced by Pascal Rouaud's Roch serie. This one is a Roch-like map but with some van Oostrum influences. There's a huge, good looking bridge pretty much like the one we saw in Roch 6. Buildings are not copies of each other and there's a lot of them, even outside the gameplay area which makes this a convincing looking city map. There's also some vegetation and well scattered light poles. The only problem with the level's design is the lack of proper lighting in some of the level's indoor areas.

Gameplay: The map is pretty much totally nonlinear but still quite straightforward: when you get to the streets you can choose the order in which you enter various indoor locations. Each location has a blue key and a switch and these switches open the last door. You may miss a few outdoor switch locations at first but there are viewscreens that should give away their location. It's nothing difficult and the level's item/monster (including some good monster spawns) ratio is good. The streets felt a bit empty and the environment seemed somewhat static (no explosions, no scripted sequences, nothing surprising or new).

Conclusion: A good, well designed 30-minute ride but it suffers from lack of originality and spicy gameplay. 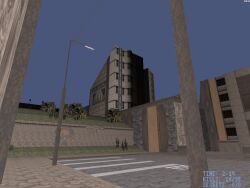 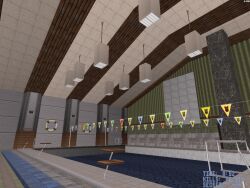