Description: The Community's first speed-mapping project. Each participant was given one hour to work on the map. Seven people took part.

Review: Despite the fact that there were no decisions made concerning theme, the level spontaneously turned into a fine city map. The seven people who participated all have different styles: some focus heavily on details, some on a fine balance between design & gameplay, some on large open areas and so on. However, it takes a good, experienced builder to actually recognize which author worked on what area (some stand out if you're familiar with the author's previous work). Gameplay is linear, as one would expect, but well balanced.

But of course some build in a way that doesn't necessarily fit well with the general idea of a 1-hour-to-build project. The first and the last areas were left relatively empty. For example, the first area has a few decent details but apparently it took some time to build them, leaving the part as a whole relatively empty.

Conclusion: At 112 kb, the level is not that small and it's reasonably deatiled even though it was started & finished within seven hours. Now that the participants are familiar with the limitations of speed-building they can come up with even better stuff next time and maybe attract more builders to join the fun. 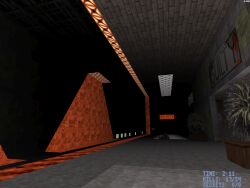 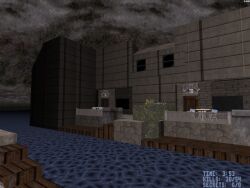