Description: Spiker caught us by a surprise about a year ago with his brilliant Project Zero. Scar-City, a medium-size Duke Plus city map, is less ambitious.

Into it: Once again your ride gets shot down and you end up on top of an apartment building. After doing some roof-to-roof jumping, you head indoors to kill some aliens after which you get fly a Skycar. Design is average and relies more on atmosphere than details. The rooftops are the best looking parts of the map with moody rain, billboards in the distance and some DP smokepuffs.

You get to play Chuck Norris for a while before getting your hands on a pistol. This works pretty well actually since the rooftops are occupied by weak Troopers. For some reason Spiker enabled hopping (double tap a directional key and Duke makes a small leap) for this level which is rather annoying, especially if it ends up throwing you off a building. As said, you get to do some flying near the end, so this level has the honor of being the first usermap to feature the Skycar. The only problem is that the area where you're supposed to fly is rather cramped, so the experience is not quite so liberating but it's still a nice addition.

Conclusion: A rather modest effort after Project Zero, but Scar-City is still a fun map and you should check the Skycar ride to prepare yourself for the first Duke Plus CBP which should be out shortly. 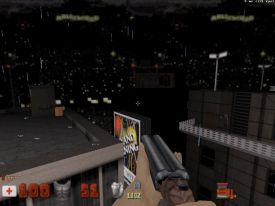 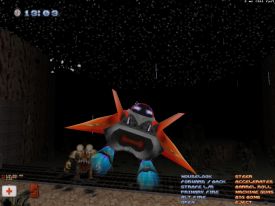