The review: The map is from the author of The Space Mission, a refreshing single-player minimod released last spring. This small-to-medium-size usermap continues in the same vein, being a combination of old & new. In case you missed the title, the map takes place in a riverside town. This is played out very effectively, giving it a nice sense of location rather than being just another generic collection of city blocks. The TROR effect has been used effectively but your framerate might take a few severe hits, particularly when you're in a position that allows you to view the entire outdoor area. In fact, near the end my fps dropped all the way down to a pitiful ten frames per second. Even so, Polymer is a requirement since the map is terribly glitchy without it. In addition to the well-utilized but costly TROR, there are a few other visual highlights, most notable being lights of traffic in the distance, an effect I don't remember seeing used this well in a Duke3D map before: something as simple as that can really enliven a map's atmosphere! As for criticism, some indoor locations were lacking in texturing (the power plant) and/or details (the backalley, the cramped bar). Gameplay is fine with a few multi-button puzzles and a good item-monster ratio: most of my problems resulted from aiming difficulties under low framerate. In conclusion, Riverside Town is a cool little map (took me just ten minutes) with a few new ideas, a strong sense of location and, from time to time, a potentially crappy framerate. 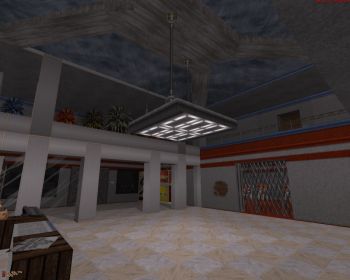 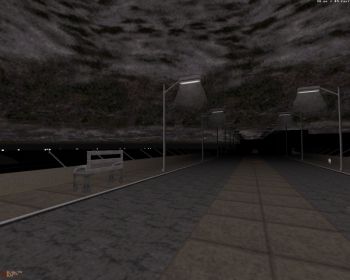