Description: A sequel to Resistance Rocks, Demolition Plant is the second map of the upcoming "Rendezvous" episode. It's a medium-to-large size canyon/hi-tech map and a steady improvement from its predecessor.

Design: RazorZ seems to have picked a style that could be described as "vanilla", away from such styles as demonstrated by the heavily detailed bobsp maps or the "messy" Red serie. You'll be spending more time looking at how various areas look in general instead of staring at some computer terminal for ten minutes (the one in the shot is pretty good though, just not very original). Texturing plays a huge role and RazorZ is experimenting here a bit more than in Resistance, especially with different palette and texture combinations without derailing the overall clean look of the map.

Gameplay: "Vanilla" dominates here as well. One of the strongest points in Resistance (and in Duke3D back in the days) was how you could blow up a wall and notice that it takes you right back to a previously visited area. Demolition Plant shines in this department; there are many areas that you can reach via 2-3 separate routes. The downside is that this might get confusing but I didn't get lost until after getting the blue key by which time I had forgotten what I needed it for. Nevertheless, it's great when at one point you're looking at a structure and then ten minutes later you end up on top of it. Item/monster ratio is good throughout the map (at least on the second skill level) and I managed to get killed only once when I accidentally ended up between two nearby Battlelords. There are no medkits but more than enough health packs to keep you alive and well (at least unless you're a n00b in which case you should be playing Pong). There's also a fine balance between indoor & outdoor and confined & open areas.

Conclusion: Not much to complain about this one. If I had to find something specific to say, it'd be the fact that, being a "vanilla" type of map, there is not a single moment that makes you go "wow!" or "how did he do that?". But, this being only his second map, RazorZ has plenty of time to come up with even better maps. Demolition Plant is good but rather ordinary fun in a well-detailed environment for about 30 minutes. 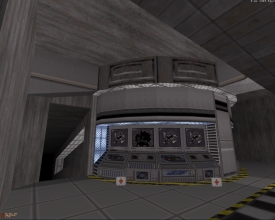