Description: The first map of an upcoming "Rendezvous" episode, Resistance Rocks is a medium size canyon/hi-tech map. Duke is sent to somekind of a hydro station which has been taken over by aliens.

Into it: The first part of the level consists of a bunch of caves where you travel for about ten minutes, trying to find an entrance into the hydro station. While generally well done, this part provides no eyecandy and is a bit bland. There are some underwater segments and cracks on walls that provide a sense of connectivity once blown up. It doesn't get much more surprising once you get inside the station, which is generic to a large degree but looks much more interesting than the cave area mostly due to consistent texturing and good lighting. This area too is well connected and nonlinear so that you seem to have several route choices wherever you go. There are some annoyances such as explosions that occur right in your face and several unfairly planted tripbombs. Moreover, the entire level is pretty cramped which is not a big problem until you run out of bullets and are forced to fight aliens with your RPG. One thing that surprised me was the total lack of ambient sounds even though there were many locations where they should have been used (waterfalls, streams, machines etc.).

Conclusion: By its looks Resistance is pretty generic but still well above average. The level has an interesting layout and is quite easy to navigate but a bit too often I ended up dead because of the cramped nature of the level. The lack of ambient sounds is something that beta-testers should have noticed. 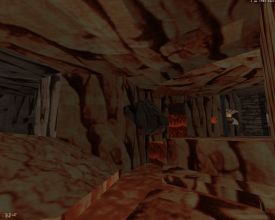 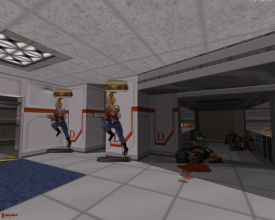