Description: Reginukem's fourth single-player release at MSDN . This one's based on some Japanese anime series but all you need to know is that it's a quite good city level with some nasty explosions & nice cars.

Design: Where shall we start? First of all - there are lots of things in this level which could have been fixed easily. Shadows are mostly very nice looking but they're missing in some places and the most bothering part are the light sources which are completely missing from the inside areas. There are bright rooms with no lights or anything. I also spotted a blinking sector without a light source. Now how can a sector blink when there isn't any reason for blinking? Rest of the design is very good. Some places are a bit empty but that's just a minor flaw. Design is simple & clean and spritework is brilliantly used on the backyard side of this one building. There are a lot of vehicles which are all detailed, futuristic & realistic. Then we have a lot of damaged buildings which really look brilliant.

Textures: Level is quite white with bright rooms & white textures and a blue sky - And it works. Reginukem has his own strong style to do things but I have to admit that some places could have used a lot more trimwork.

Gameplay: There are some nice explosions and puzzles feel a bit more interesting than usually but the number of monsters is just too small. Difficulty Settings have been implemented but they won't help much. S1 is just too easy with less than thirty enemies and S3 won't increase the number of enemies much (a bit over thirty). Level is also too silent - there should have been more ambient sounds.

Conclusion: Well designed level with some lighting problems & a bit too easy gameplay. It has some nice explosions and things which spice up the gameplay and Reginukem's style is always worth to take a look at. 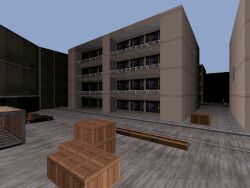 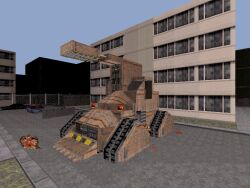