Update (8.12.2011): The map has been patched a few times since this review was written. The updated version has noticeably better trimming, texturing, lighting and several bugs have been fixed. There are still some noticeable problems particularly with respect to trimming and bugs but the map looks better now which is why its rating has been increased by two points.

Description: A highly nonlinear map by a first-timer, RCPD is a police station that's been taken over by anthropomorphic pigs dressed as cops.

Into it: RCPD is unmistakably a rookie map. Trimwork is almost nonexistent, spritework is totally nonexistent and while texturing is good for the most part (there are some noticeably odd choices such as the floor texture) the lack of trimming clearly brings down the overall impression. I also noticed a considerable amount of misaligned and oversized textures.
However, underneath this sloppiness is a rather well designed map. There are several areas that stand out such as the second street segment and the ending. Lighting is good but a more ambitious 3DR look would have worked really well here.

The map's nonlinearity is rather refreshing. You're constantly discovering new routes and rooms but the map remains rather simple to navigate. Several areas are wholly optional so there's something for those who like to explore. There's also a cool multi-floor elevator (although it broke down during my first playthrough) that has hardly been used before. The police station has three floors so there's plenty of travelling between the them which only adds to the map's open-ended layout.
As is usually the case with nonlinear maps, your ammo/health situation is largely determined by the routes you happen to follow. During my first playthrough I entered the station before acquiring a shotgun and quickly found myself out of ammo. However, there's plenty of health around to keep you alive until you get your hands on more effective weapons.

Conclusion: RCPD's layout is full of promise and there are many things the author has done right, including good lighting and texturing. However, it's the map's general sloppiness that gives it that unfortunate beginner look. While a good map underneath both in terms of design and gameplay, it could've easily been better. Still, definitely worth your time. 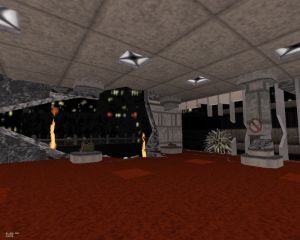 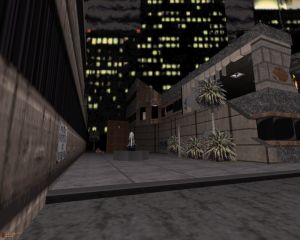