Description: Another CBP in our long list of community projects, this time with an eastern flavor. RCBP is a Russian project led by Sanek and it's some kind of a moonbase map with a few new effects.

Review: Overall, this is a fine level but unlike consistently built maps such as JFCBP2 and CBP7 RCBP has more variety in terms of quality. There are ups and downs, especially the hive part seemed a bit rushed (doors are not properly aligned, sounds are missing) and not very detailed (poor trimwork). However, with only four builders the ups and downs are not much of a problem. Even the hive part had some good things such as this hall full of pillars and the first part (Sanek's part) had a good (in terms of gameplay) underwater area. The two areas between Sanek's part and the hive are clearly better with cool new effects (a radioactive room, the now-famous "Lincoln puzzle") and above avereage design (a cool circular tunnel leading to the Lincoln puzzle). One thing I didn't get is that if this is supposed to be a moonbase then why is it snowing?

There's a new con in the zip which adds two new, although pretty insignificant, enemies. One is a mild version of the Protozoid Slimer (too slow to cause any damage) and the another is a shooting security camera. They work as nice little additions but could have been better. There's a new Doom-like midi, a simple tune that works pretty well.

Conclusion: Some parts certainly would have needed more work and due to the snowing effect you never really find out whether this is supposed to be a moon or a winter map. I found the gameplay pretty good with all the new tricks and gimmicks. 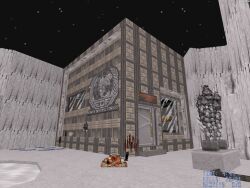 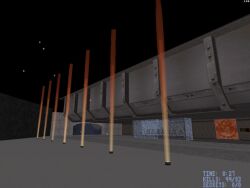