Description: This map might be everything you're going to see of AvP 2 TC. It's a one-map mod based on the last thirty minutes of Predator 2. AvP TC is required to play this map.

Design: The map has four "scenes" from the film: The big building Predator climbs up only to pump his ego, the metro scene, the slaughterhouse scene and the Predator ship. If you haven't seen the film you're an idiot and should not play this map.
Architecture is rather simple with a few details there and there. The street area in the beginning didn't really look bad but there were invisible walls and a horrible flat wall peeking from behind a set of buildings. The slaughterhouse looked ok although was a lot simplier than in the film. I liked the way the metro cars were shaped. My biggest problem is with lightning. There are plenty of areas, like the metro or the Predator ship, that had almost no lightning effects at all and therefore they felt pretty dull.

Gameplay: There are only three enemies (Predators). It's not quite as easy as it sounds since they're bad-asses - especially the invisible one. There's one "fatal" bug. You better not miss the yellow key which you'll find right near the start of the map SO KEEP YOUR EYES OPEN! If you miss it and fall down the building you won't get a second chance to get it pack. This is the kind of thing you never encounter in commercial games - for a reason. Gameplay bugs like this are "gameplay killers".

Other: The map comes with a new set of textures and sounds (from Predator). They're of varying quality.

Conclusion: I like the way the level progresses and spotting familiar locations was fun. The design doesn't live up to its potential and some things have been left unfinished. 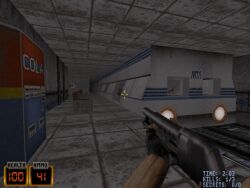 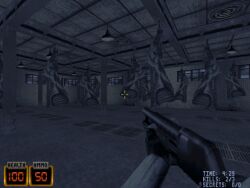