Description: Nocus has been working with Build for years but only recently gain access to the internet. A lot of his levels were released at Repository only a few months ago. MSDN has missed these levels due to their amount & the fact that I ain't got much time these days to review but now here's one from Nocus - so far his best level called 'Overtime' which mixes city theme with hi-tech. And boy it's big.

Design: Now this one's pretty cramped - cramped with sprites, cramped with stuff, cramped with monsters & all. The results are pretty good - the office complex in the beginning looks pretty awesome with all those papers lying around. Outside areas are filled with trees - surrounded by nice sprite fences and the supermarket thing is covered with all sorts of graffities (and there's a LOT of them). Duke DC trees work pretty well here. The first huge outdoor area has some cars - they're okay and spice things up (realism) but they're not really Roch-quality (what would be?). Shadows are well placed and realistic although at times I hoped to see some eye-candy lightning effects (sloped-along-the-wall type things & such). There's also some good spritework.

Textures: This one comes with a huge Tiles014.art file (from Duke DC) - but the level only uses a few of these new arts (kinda waste of space). Those new window textures/sprites which are used particularly in the office complex look very good. The rest of the level's texture usage is also pretty good although I few times I'd have made a different choice concerning texturing.

Gameplay: This one took me twenty-six minutes! At first the combats might feel a bit tough - but once you get your ammo and health packs you'll get over it and the gameplay gets closer to being easy than hard - thanks to well spread health packs & plenty of ammo. There are quite a lot of monsters including Battlelords & Commanders (who tend to attack in packs of four-five monsters) so the level is a lot of fun. There's also a storyline to follow - it's pretty typical but better than nothing. There were a few button puzzles which I didn't like that much. Also I'd say that I found the last button (the one which detonates the market) by an accident - don't know how long it'd have taken me if I hadn't.

Innovations: Yes there's one cool puzzle with a Pipe Bomb & crane. Similar effects have been done before but it's still pretty good. 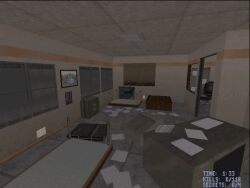 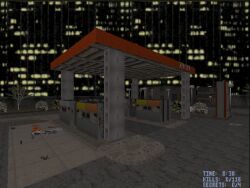