Description: Outpost X is a two-map sequel to Space Map Number DUNNO (released three years ago) and a part of a bigger episode, to be (hopefully) released one day in the grim darkness of the far future.

If a Duke map ever came close to Unreal, the first map of Outpost X, "A Warm Welcome" does. As was already evident in Sang's Battlefield 3, he's the master of Conceptual Grandness. Outdoor areas in "Welcome" are huge and there's plenty of stuff to see in the distance such as observatories and temples. Lighting is good, even impressive at times which is an achievement considering the level's huge scale: it becomes difficult to keep track of where the Sun is supposed to cast light when you're trying to manage a level of this size. (Sometimes the angles seem wrong but this is minor as you probably won't pay much attention to where the light is supposed to come from.) The level also utilizes a bunch of 3d models such as huge trees which definitely work better than the palm trees in Duke3D. One of the most impressive things I've seen in a long time was this huge cavern with wiring hanging from the ceiling.

Despite its huge size, "Welcome" only takes about fifteen minutes, assuming you pay a visit to an "extra" area (with plenty of weapons, so it's worth it). There are plenty of enemies and they usually attack in packs. You're given plenty of RPG rockets to fight some strong enemies such as Tanks and Protector Drones. There are some new and effective ambient sounds and a new midi. 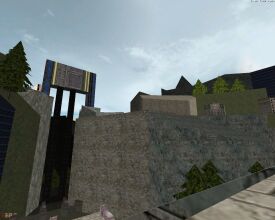 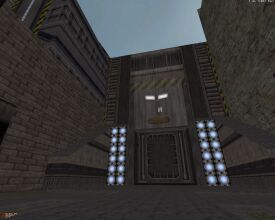 The second map, "Breakout", is an indoor map where Duke must escape from an alien outpost, namely Outpost X. This is another map which relies heavily on Conceptual Grandness. Once again the scale of things is pretty big (even though you won't spend time outdoors until the very last minute), but good texturing and trimwork compensate for the lack of the kind of details you'd expect to find from a modern map. However, some areas are clearly inferior to others. Lighting is good but not impressive.

You'll spend a lot of time backtracking and just walking through huge hallways. This is not a bad thing, however and there are plenty of respawns to keep things alive. The base really feels like an alien city of sorts with living quarters, kitchens and so forth. (There's even an area that's been specifically reserved for Enforcers!) The base is pretty nonlinear, with some optional routes and locations you don't have visit (but should). Once again ambient sounds (and music) have been used effectively to boost the level's atmosphere. Ammo is not a problem and finding keys and buttons is pretty straightforward. The ending is the biggest challenge with plenty of Pig Cops and Tanks. It's a rewarding fight though and you'll be hitting the Nukebutton with a smile on your face.

Conclusion: Sang plays to his strengths by focusing on making things big and interesting. The first map is an impressive outdoor adventure with plenty of interesting things to see and some good combat situations. Even the second map, a hi-tech base with just one outdoor area, manages to look good despite Sang's apparent unwillingness to focus on tiny details. The level manages to appear as something other than just another generic hi-tech base. The amount of backtracking in both maps is something some players may find tedious and there's no proper storyline to accommodate gameplay but this may change with the full release of the episode. 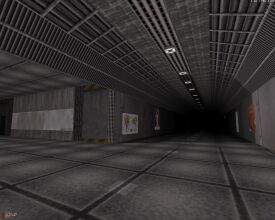 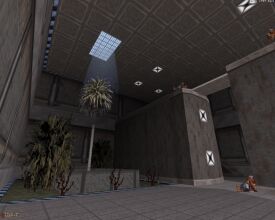