Description: Operation Blitzkrieg was released years ago but as far as I know, it went under everyone's radar. This re-release is a remake of that first version. Blitzkrieg is a five-level single-player episode with a classic Atomic Edition look and feel.

Into it: Like city maps in the original episodes 1, 3 and 4, each map in this episode also has a unique theme instead of being merely generic city maps with a bunch of random streets and apartment buildings thrown together. The first map is some kind of a mental institution, the second a warehouse, the third a police station, the fourth a motel and the last one an office building. Design is not ambitious by today's standards but instead relies on what made the original four episodes work, namely strong lighting, texturing and believable environments. The maps are not particularly big; each took me between seven and eight minutes. 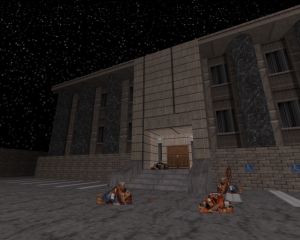 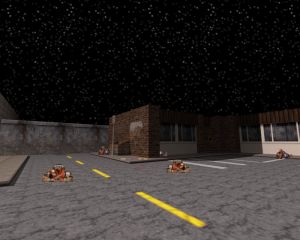 While design is easily above average all the time the maps have some problems with scale and dimension. The vast majority of gameplay takes place in relatively cramped indoor locations while outdoor locations are exceedingly rare. There are several instances where this crampedness causes you to take considerable damage from random explosions and explosions that result from fire extinguishers. As for dimension, the maps are very horizontal with the exception of the last one which eats away some of the impression that you're in a big city.

Gameplay consists of keys, buttons and a few mirror puzzles; textbook material in other words and as such instantly familiar to anyone who's spent time with this game. Skill settings have been implemented although I only played on Let's Rock (the second easiest skill level). Gameplay balance seemed fine with a few nastier combat set-ups thrown in every now and then. Ammo is abundant if you alternate between weapons. I found less than a third of the episode's secrets but had no trouble dealing with whatever the maps threw at me (I only died once) so there should be plenty of goodies to discover in case you find yourself running dry.

Conclusion: The things that made the original game, especially its fourth episode, work are strongly present in this mini-episode. Its classic style reminded me of the last episode of JJDuke (you're probably better off not reading that horrible review from 1999) which is a feat in itself as JJDuke is fondly remembered by those who prefer usermaps that stick to the classic style. The maps suffer a bit from crampedness, heavy emphasis on horizontal design and the absence of outdoor locations but if I had to recommend a classic-style episode to someone who doesn't play many usermaps Operation Blitzkrieg would be among my recommendations. 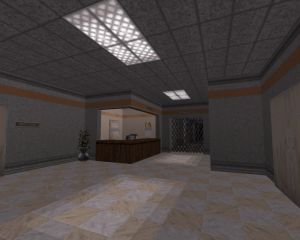 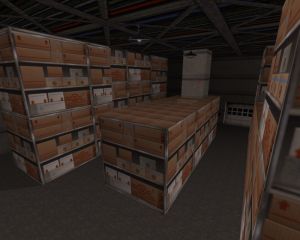