Design: Very E2L1-stylish. Lots of strong, black shadows which look very good and realistic and some neat colored hallways with cycler effects. As for the rest - nothing goes above average. Trimwork is ok, design is ok but not detailed. Texture set is strictly from E2L1. Just like in E2L1 there's a pipe in the center of the map which is spread through three levels and leads to an underwater area.

Textures: As said - strong E2L1 set. Trimwork leaves some room for improvement but it's very similar to original E2 levels.

Gameplay: Very basic with some buttons & keys. There are neither Commanders nor Battlelords (at least not on S2 & S3 modes) so the gameplay doesn't really escalate - but it's forgivable since SS Observatory is just the first part of an episode. I got once lost VERY badly but I put the blame on my own idiotism and the fact that the Sun made it almost impossible to spot a switch that was placed on a dark wall. Patrolling spaceships are a nice addition.

Conclusion: "SS Observatory" turned out to be a nice E2-stylish level. Both gameplay & design are of very standard quality and there's hardly anything original. 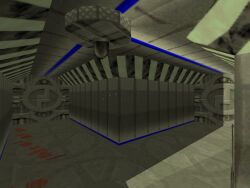 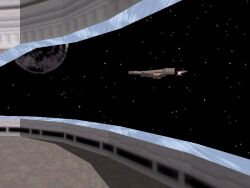