Into it: The level weighs almost one megabyte which (while not uncommon these days) makes it one of the biggest maps in terms of file size. You can expect around 20 minutes of gameplay. The city has been divided into four larger outdoor sections. While you get to visit apartments and night clubs from time to time, most of the action takes place outdoors. The city is detailed and has a few cool surprises which you better see for yourself. The cool overpass bridge Pascal introduced in Roch 6 has been put into good use here; twice. And it's not just this that gives the city a realistic look but there are several buildings and construction cranes outside the gameplay area that really manage to make the level look a bit like an actual location. There's also a cool park with good-looking trees and a sewage pipe, suggesting that this place is no good for picnic, not with all the alien eggs lying around.

The level supports several Duke Plus features but, while the author recommends Duke Plus, I found the vanilla version (fully supported) better. But if you're a friend of hectic battles (and of "realistic running", a new DP feature that's totally out of place in a map like this), Duke Plus is your way to go. Puzzles are pretty straightforward, including one where you have to hunt four blue key cards one by one in order to gain access to a night club. The amount of details, especially spritework, makes it a bit hard and tedious to move indoors especially after having just enjoyed the open spaces of the level's outdoor locations. This was maybe the only noticeable shortcoming of the map. The map also features a new "music track" that consists of environmental sounds such as gunfire and mortar blasts. This works actually a lot better than some random midi and is not the only good custom sound file that comes with the map.

Conclusion: Nightshade Army is a good city map with tons of interesting locations, a few surprises, a good "music" track and some good battles, hectic battles actually if you dare to play the map with Duke Plus. 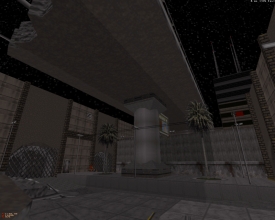 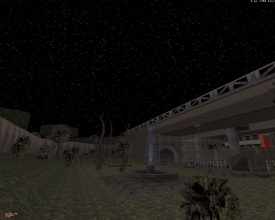