Description: Duke must finish what Ripley started but failed to bring to an end. Your mission is to board Nostromo, blast the crap out of aliens and get out. Needless to say, but I'm doing it anyway, we have another Alien map in our hands though you should be glad it's not another LV426 remake.

Design: Being based on the movie Alien, you're bound to recognize some of the locations, such as the hypersleep chamber, the cockpit, the cargo bay (with chains!) and several others. The ship has been divided into three parts (a, b and c decks) and there's a lot of copy-paste going around. Generally speaking, there's a reasonable amount of details although some parts were left looking rather modest. However, the biggest problem is lighting, which is not quite what it could be in a map like this. More cycler and SE4 effects would have spiced things up a little bit, maybe even some colored lighting near the end (more about this below) and more big, strong shadows. Interestingly, most doors are switch-operable and they look pretty good. It always feels "safe" to be able to lock a door behind you in maps like this. Texturing is good and Puritan manages to avoid all the usual cliche trim textures.

Gameplay: This is more like an adventure type of map than a slaughter fest. You'll spend only a few of the 25-30 minutes the map should take you fighting aliens. There are some good ambushes but nowhere near enough for a map like this. I'm also not sure that mixing all sorts of Duke3D aliens works better than relying just on Protector Drones and Protozoid Slimers, the usual recipe for an Aliens map without custom monsters. It's a bit of a shock when, after killing a few Protectors, you're face to face with Enforcers. Gameplay is pretty good. The level's layout may seem a bit confusing at first but you shouldn't get confused if you pay attention to signs and viewscreens. Near the end the ship is about to blow up and you've got to hurry. However, there is little sense of hurry until the very end. Things blowing up, ceilings coming down and hallways getting filled with red light is what I expected. (This doesn't apply to the very last minute, one of the coolest moments ever!) Ambient sounds have been used modestly; more custom stuff from the many Aliens releases available just might have boosted the atmosphere quite a bit and a silent, monotonic custom midi track (or no music at all) could have easily beaten the standard Dethtoll midi which doesn't fit the level at all.

Update: An improved version of the map was released shortly after the reviewed version. The new version has better ambience with improved sound usage and lighting. However, while lighting took a step forward, it's still rather modest and the kind of cycler effects that could really set the mood are still missing. Nostromo is still a long way from other Alien themed maps such as Aliens versus Duke and Return to Fury 161. The improvements amount to something though and therefore the level's rating increases by one (from 90).

Conclusion: Walking around the million hallways of Nostromo is good fun but not as moody as it could have been. The much shorter Nostromo map found in Alien versus Predator TC is a bit better thanks to its scripted sequences and well used ambient sounds. 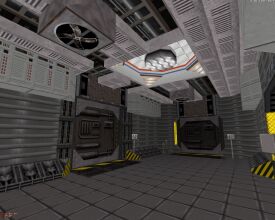 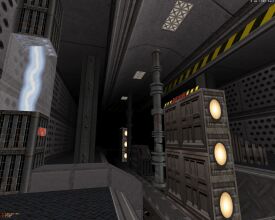