Description: MRCK surprises is in the form of a heavily Red -influenced spooky level. A bright star fell from the sky near some dark village and Duke is going to find out what happened.

Design: Although heavily inspired by Red & Roch levels this one's still a definite MRCK map with a bit small scale for rooms, spritework etc. It's not cramped really - MRCK seems to have gotten over crampiness. The level has tons of nice scripted sequences & such stuff - check 'innovations'. Spritework is rich and clever and texturing is great with not-so-commonly-used picks. The big wall surrounding the gameplay area looks a bit ugly and majorly unrealistic but at least there's a weak story for its existence. I heard that the level is a bit too dark and yes it's dark definitely but if you're a 1337 you'll be playing this with the latest version of Jonof.

Textures: As I mentioned the menu has a bunch of textures that hasn't been used before the way they were used here. In this arena MRCK follows the path of Roch & Red maps with as many new texturing innovations as possible. The door texturing in the first house will draw your attention.

Gameplay: With about thirty enemies you won't be fighting that much - The gameplay relies on ambience and tough fights with bosses & Protectors. In tight spaces the Protectors will eat you alive but with little skill you'll make it. The final battle with the boss has its downs since I'm sure that MRCK could have come up with a better boss-free ending.

Innovations: There are scripted sequences such as a car crash, the capture of Overlord, some spooky stuff and a few other cool tricks you have to find yourself. They're all very well done and add a lot to the atmosphere. 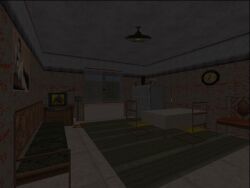 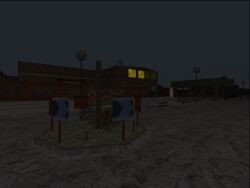