Description: A very ordinary hi-tech map and a step forward from Steambull's previous map, The Newbeast Research Facility, which looked good but suffered from below average item/monster balance.

Design: You're supposedly in space but there's hardly any way of telling it - there's just one room with a space view. The level's architecture is the sweetest in a long time, combining elements from Maarten Pinxten, Bob Averill and Alejandro Glavic. It looks very clean and stands out as an antithesis to all those "messy" Oostrum/MRCK maps. Texturing and trimwork are particularly well done and there's some amazing spritework too. Steambull managed to spew out some nice colors using normal palette values and textures while many hi-tech maps have fallen into using textures in a messy way or have ended up being just a bit too gray.

Gameplay: In terms of gameplay the level seems to be completely happy with being totally ordinary. Buttons and keys is what you'll get. Enemies are well placed, ambushing you from all sides and in all shapes. There's just about enough ammo and little extra health which makes it all the more enjoyable (but not hard). The level should take you less than ten minutes.

Conclusion: A well balanced but ordinary map, and the architecture, while incredibly detailed and well textured, doesn't offer anything "grand" - just rooms one after another. 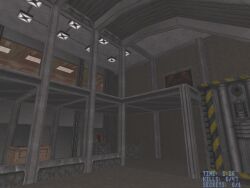 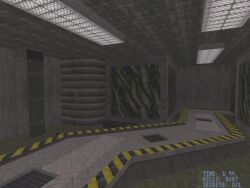