The Review: Every once it a while it seems that the aliens do manage to capture Duke. Rather than just killing him on the spot, they try to confine him within the walls of some alien prison cell, hoping that this is the time he won't escape. In Naked Dash the aliens have something else in store for our hero. They "release" him, like a rat, into an elaborate maze constructed to look like a human environment and observe his attempts to make an escape. The premise alone gives the map a unique flavor.
What follows is a series of puzzles involving almost every trick in the Build playbook. These range from the ingenious to irritating. Some require precise timing, other looking around for clues; the worst require trial & error. Which one of the many puzzles ends up being your Achilles' heel is impossible to tell; some will struggle in bits that others manage to breeze through with ease. I found many of the puzzles to be Portal-like, i.e., fair, solvable within a reasonable time frame and ultimately satisfying. Knowledge of the Build engine's idiosyncrasies helps, but the map isn't too reliant on the player knowing Build/Mapster32 inside out. Generally speaking the map makes a great use of the game's mechanics and is also well designed in every regard (even if it basically looks like every other Mister Sinister map out there).
My only bigger problem is that the map has a secret ending that's a bit too hard to get to. Ordinarily I wouldn't mind, but the size of this "ending" basically makes it a map of its own. However, in order to get there the player must not only remember a certain lesson from Portal, combine that with an obscure mechanic of the Build/EDuke32 engine and then collect three key cards. By the time I had reached the entrance near the map's end after about 50 minutes of playtime, I had stumbled upon zero of these keys and just couldn't find any motivation to start backtracking for who-knows-how-long even if the reward seemed enticing. At the very least the author could have provided the player with improved access to earlier sections of the map at this point.
Aside from that, the map was quite a ride in a very much positive sense of the expression. The map will probably frustrate everyone at one point or another, but it's ultimately a rewarding experience. To boot, The Truman Show-like world the aliens have set up for Duke is a nice switch from all the other maps out there. 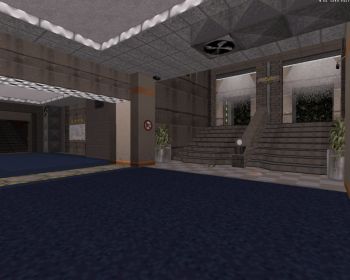 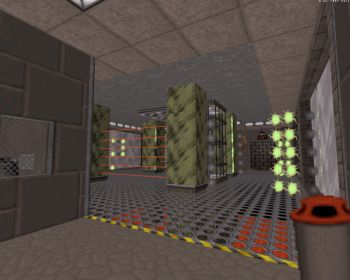