The review: An old map by Gambini, Ex Mortum is some kind of a medieval/pirate theme park. The level is ten years old but it's got a fair amount of details, especially the second half, at least enough to make this a recognizable Gambini map. The map does suffer from scaling problems, which are common among newbies, except while newbies tend to use too large a scale (for example, doors are twice their expected size), Ex Mortum goes the opposite way. The first half's medieval fortress provides barely any room to manoeuvre and the second half doesn't get much better than that. This crampedness issue is only exacerbated by the fact that there are several spots where monsters spawn right behind you so a stream of saving&loading is quite inevitable. The best example of this scale problem is a highway bridge near the end, which looks like a miniature version of what it's supposed to represent. Still, Ex Mortum is a well-designed map and the very fact that its author went on to design It Lives a decade later should make it an interesting piece of history. 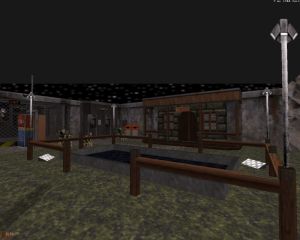 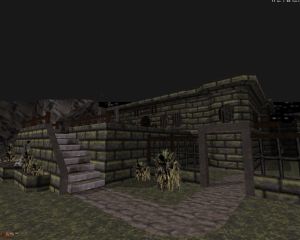