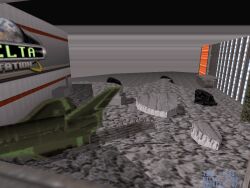 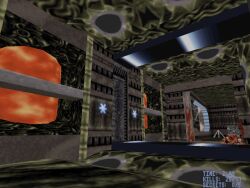 Description: A seven-level space episode. EDuke32 required. HRP was recommended but I didn't use it.

Review: The episode starts off with a rather mediocre level, Delta Station. Duke's ship has crashed on some moonbase and it's his job to kill the nasties infesting it. The level's got some cool ideas and is, for the most part, a nice ride but it suffers from very cramped and sloppy design. I also had trouble finding the first key due to a "hidden" elevator. If I had to praise the design for something it'd have to be the few Lunar sceneries you get to see through windows.

The second level, Alien Station, is already clearly better. Gone is the crampedness that plagued the first map. This is actually kinda like William Gee's WGAlien with a good use of alien textures and lights although lighting effects are mediocre (way too many bright areas). There are also some good puzzles and yes, they involve jumping on rotating/moving platforms but it's done so that you shouldn't get too frustrated.

The third level, Gamma Station, is even better than the last one. Here the author has clearly put more effort into detailing and lighting. I liked the way you travel from one station to another via teleporters. There are also some good setpieces such as a meteor/missile hitting a base wall, running from a huge explosion etc. This is the biggest level of the pack, taking around twenty minutes.

Then it's time to get your ship crashed again. The fourth level, Alpha Station, starts off with a nice scene where your spaceship crashing causes a few rooms to collapse. Needless to say, you shouldn't stick around and see what happens. It seems that the whole station has suffered from your crash. The level looks a bit dull due to its grayness and lack of lighting but there's a good amount of interesting architecture and some needed underwater areas. The level has a bunch of button puzzles where you have to locate the right combinations before you start randomly messing with buttons. The combinations are easy to remember so you don't need to have a pen & paper next to you.

A standard fight against the Queen wraps it up. The fight itself is easy and offers no surprises but that seems to be the way it is with Duke3D.

There are also two secret levels. The first one is based on Entryway, Map01 of Doom 2, the one we have seen remade a million times. The one in Moonbase Accident is actually pretty cool. It has this rusty/abandoned feel to it and I liked the exteriors surrounding the base. The second one is a rather odd map with plenty of black & white rooms with various neat effects and tricks, a haunted house that seems to borrow quite a lot from the "Red" serie and a moving train (these are always pretty good). I really liked the second secret level: there's something fun and good looking in every room. The secret levels are not hard to find but if you can't find them, don't ignore them. Remember dnscotty106 & dnscotty107.

Conclusion: All in all, this episode got me by a surprise. Space maps tend to be rare these days and most of them are pretty standard. In Moonbase Accident, something is always going on and the levels don't repeat the same ideas. Don't miss this one and keep an eye on any future releases by Piterplus EZ junior. 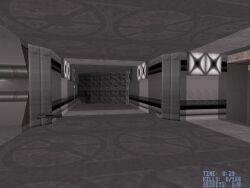 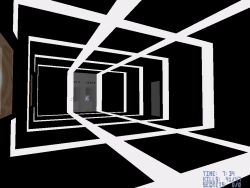