Description: Supertanker - the daddy of to-be-released CBP7 - is back with another hi-tech map.

Design: The map could be a space remake of Supertanker's previous map - Aqua Base. The theme is pretty much the same - some hi-tech corridors and rooms with a bunch of simple yet good looking details. There's little variety - the reactor room looked pretty good but I'd have wanted to get out for a while (to do some moonwalking!). If there wasn't that outdoor area (which needs more details - especially the mountains) in the beginning you'd have no idea that you're visting the Moon. Supertanker has improved his use of shadows but some rooms are still a bit too bright/without much lightning.

Gameplay: Standard stuff - keys & buttons and a txt that provides a storyline. Fun, shortish but the ending is a bit letdown (as was the case with Aqua Base).

Conclusion: Nothing new - it looks and plays cool but has little variety and even less special effects & innovations. 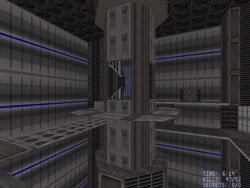 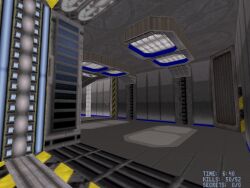