Description: Imitating original Duke3D levels has become Fernando's trademark. 'Lava Reef' could as well be called 'The Abyss Redux'. If you liked The Abyss (E1L5) you'll love this one.

Design: The Abyss-like design is nice but offers very little memorable moments. It ends up recycling old themes and ideas while offering very little new. This however seems to be the case with many levels these days but since Lava Reef recycles the very first canyon level the usage a bit more obvious. In terms of lighting the level succeeds - the same goes with the overall design - a moderate amount of details has been included.

Textures: Texturing is obviously very E1L5ish. There's nothing beyond that set. The usage is pretty good although richer trimwork would spice things up a bit.

Gameplay: The level flows pretty well with good balance between monsters/ammo - until the unbalanced combat in the end. With low hp and no ammo for RPG or Devastator the miniboss/boss combat feels impossible. The toughness of this combat depends on how you have prepared - during the second playthrough I encountered only minor problems (with the eggs mostly).

Conclusion: 'Lava Reef' turns out to be a fun level with a bit above average design. It recycles the old ideas while offering very little new. 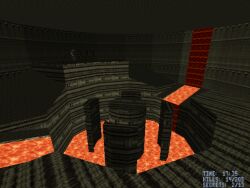 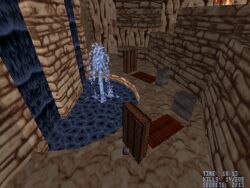