Description: William Gee started a contest about two months ago. The participants were given an empty level (included in the zip) which had to be filled as the player wished. However the builders weren't allowed to add any extra rooms outside the designated area or remove any existing structures. They were also forced to use a set of custom textures. A bunch of people joined but only one of them finished the project and the leader took off as he was infected by a nasty virus - Real Life.

Design: In many ways this level reminded me a bit of 'Open Season' from WGRealms. The texture set is similar and the design varies between huge outdoor places and hi-tech indoor hallways. The design is top quality thanks to good use of textures and nice amount of details. The level has a significant underwater part too which brought me back to the good old days when I was experiencing E1L4 for the first time. Extra points for realistic looking terrain design.

Textures: The given texture set is a mix of both good and mediocre textures. They don't all fit with Duke that well but Kef has managed to mix them well and trimmed them so that the level looks very rich and unique (although it does remind a bit of Open Season for obvious reasons).

Gameplay: The journey consists mostly of logical button/key hunting. The monster/ammo ratio is good and the underwater part adds some extra challenge. The point of having two blue locks was a bit unclear - I found the second blue key during my second playthrough (it's not needed if you don't waste the first one on that underwater gate).

Innovations: Kut World uses Billy Boy's odd room-over-room effect a few times but other than that there's nothing new. 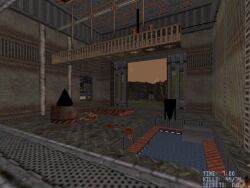 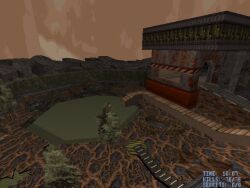