Description: Huge nonlinear prison level which was originally going to be a dukematch level but Victor decided to make it single-player as well. That was a smart decision because this level is way too big for any kind of dukematch activity.

Design: Design is quite empty but still enjoyable and well designed (clean, bug free, practical). Outdoor areas are quite impressive with some nice rocks, cliffs and shadows. There are also some nice curved surfaces. The most impressive thing is spritework which has been used often. Spritework works as a surface in one area and the results are impressive. There are also sprite bridges, tables etc. Shadows are good - especially in the outside areas. However some inside locations have totally unrealistic shadowing which looks a bit strange. This one huge messhall for example has zero lights but still it's very bright. The same goes to many hallways etc.

Textures: Texturing follows quite gray/brown theme. Outdoor areas with blue sky, green grass & gray structures look impressive and simple but indoor areas could use better texturing. Hallways are just too similar with each other. Richer texturing and better trimwork is always welcome.

Gameplay: There aren't many levels like this out there. Gameplay is totally unlinear. You can go almost everywhere and it might take some time before you locate the first key. There are many blue key card locks and you don't have to have a key for each one of them. Level is full of monsters - both normal & respawning. It could have used a few Battlelords as well. However monster/weapon balance is very good.

Innovations: Eh - nothing veeery outstanding except that unlinear levels aren't seen so often. Spritework has spawned some new innovations here such as this basketball 'thing'.

Conclusion: Design is a bit above average but the score comes mostly from enjoyable gameplay. Your opinion will depend quite much on whether you like unlinear levels or not. 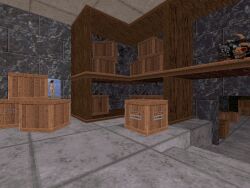 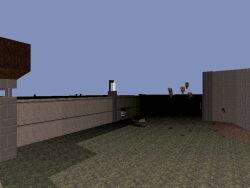