Description: KaiseR - the man who surprised the community a bit over a week ago is back with another hit level. "Kaiser Land 02" is at the moment the biggest released Duke3D level with over 2000 sectors (my "Earth Base" held the previous record with a bit more than 1700 sectors). Jonof REQUIRED!

Design: Hi-tech/seabase style of the first KaiseR level continues but later turns into a mix of hi-tech & Xen-type alien-planet design. The transition works very well and both parts offer a lot of clean architecture and eye candy. Spritework is amazing and has some noticeable similarities with Alejandro's maps ("Military Madness", "The Lost Moonbase" etc.) That huge area with that reactor thing in the middle is a bit too empty, has poor texturing, has no light sources and is too bright (the rest of the level is very well lit) but other than that - there's very little to complain. Terrain design is realistic and detailed. Ideas feel fresh and the new skyboxes add some color. Textures: Follows strictly the style of KaiseR Land 01 with very little colored surfaces (except for some excellent colored lightning). Underwater land formations have not been painted blue which looks a bit odd and unrealistic. Especially the underwater part with that reactor thing is way too bright and looks bad without the standard underwater blue. Other than that - texturing pulls off very well with some new ideas and well recycled old ideas.

Gameplay: Less Quakeish than its predecessor but doesn't completely drop off the idea of huge battles. There are some tough combats some of which are optional (not a bad idea at all). Skill settings have been implemented and the level doesn't end up getting as boring as the first part.

Innovations: Feels fresh just like the first one. While the design has very much similarities with Bob & Ale's work it has clearly its own unique feel to it. Also I liked the idea of having some optional combats (and since there's no storyline the idea doesn't end up being unrealistic).

Conclusion: The Torch has been passed! KaiseR continues the tradition which has been upheld by men like Bob Averill, Maarten Pinxten and Alejandro Glavic. 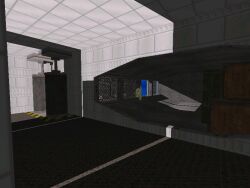 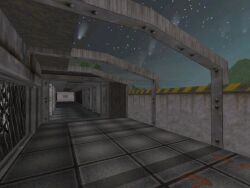