Description: A sequel to Stephano's a bit older level 'Jungle Tour'. Since that first part Stephano has released a better quality ICE episode which helped him to improve his skills for this project.

Design: This one's even more outdoor concentrated level than its prequel. Where the first JT had some hi-tech bases this one stricly concentrates on outdoor areas with a few indoor locations (one temple and some mines). Outdoor design is mostly good and partly beautiful although way too flat - Level borders - mountains could use a lot more slopes instead of just being at the same height. There are trees, waterfalls and some new stuff which gives the nature a nice atmosphere - the new stuff includes new sounds (animal/nature sounds) from games like SW & HL (the wind effect from HL doesn't fit here at all compared to Duke's original wind sound - if the level was more hi-tech instead of nature the new wind effect would work) - most of them work very well. There are some new sprites as well - bananas which can be found beneath palm trees - they look pretty cool there. Whether you like other 'fruits' is a matter of taste - I say it'd be better without them. Lightning could be better - outdoor areas are for the most part well shaded but indoor areas such as caves & mines could use richer lightning. There's one cave with some crystals - the cave obviously gets its light from the crystals but it'd be a lot better looking if the cave was darker and the crystals emitted powerful blue light - it'd look very good. Also the gold mine (very short part) has very weak lightning effects. Another thing which bothers me is the fact that Stephano overuses 'Doom-doors' - I doubt ancient civilizations & other cabins in the middle of a jungle use this kind of hi-tech doors.

Textures: Nature is very well textured with a simple use of canyon/grass/water textures. Some of the indoor locations & especially that one small village could use a bit richer texturing & more trimwork. There's also one big mistake concerning sprites - there are at least fourteen missing new sprite arts which means that you'll be seeing a lot of texture number ones as sprites.

Gameplay: This one's pretty long - Second play-through took almost twenty minutes - the first one took more than that. Also you won't be seeing much health after passing about half of the level. Gameplay gets quite tough with all the Commanders & Protector Drones. Gameplay is pretty linear but thanks to its design and big outdoor areas it feels a bit less linear than what it really is.

Conclusion: Big, quite pretty level with lots of bad guys and tough combats. Give it a try. 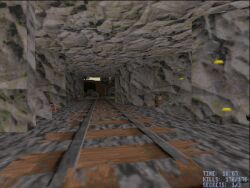 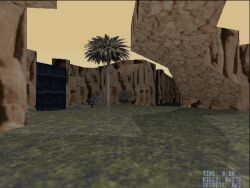