Design: Design is mostly a bit above average but some areas still have a lot of room for development. Sometimes the design gets confusing - there are maskwall/sprite errors which confuse the gameplay - these errors appear in non-GL version as well. If you play Duke with Jonof's GL port you'll have even more bugs - some textures won't show at all and some of the sprite bridges disappear (forcing you to cheat). The jungle area surrounding the beginning (a secret place in fact) also has some negative issues such as the way you get out of there (it'd have been a lot better not to let the player in at all).

Textures: Pretty good use of outdoor/hi-res textures. Texturing could have been a bit richer and some more trimwork would be a welcome addition. Notice numerous texture bugs if you play this under Jonof's port.

Gameplay: Puzzles are frustratingly hard. Killing enemies is easy and there aren't many of them but finding the real path inside those dark vents is just too hard (especially if you don't know what to look for and where). There were many other issues as well: If you choose the wrong 'stream' near the canyons in the beginning you'll find yourself stuck in this sea area from which there's no way out (at least I couldn't find any - so don't save while on this area). The same with those toxic waste things after the blue key lock: There's a switch you have to press, then dive underwater and then run as fast as you can to a door which won't be open for long - if you fail there's no way getting out of the toxic waste thing in case you'd like to press the switch again.

Conclusion: It looks pretty cool - it's interesting at times but it's too hard and has a few critical bugs. Not recommended if you play under GL (essential bridges will disappear) or don't want to go through its uber-hard puzzles. 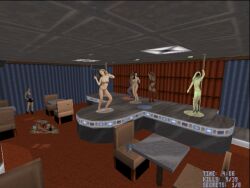 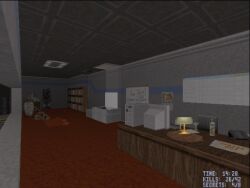