Another JFCBP map, this time focusing on a common theme. The theme is space in original Episode 2 style and it took eight people to build this thing. It's a big map that should take you more than twenty minutes. The level also features a new midi that blends in nicely. 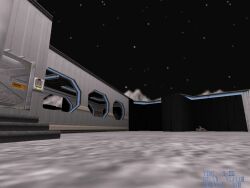 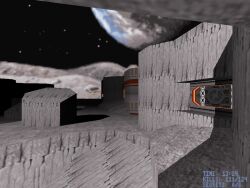 Being an imitator of E2, JFCBP2 features a bunch of shit you'd expect to find from a Duke3D level by 3DRealms: powerful lighting, lots of secrets and a well balanced gameplay. It's all there - the level looks good, especially Fakir's part, and there are plenty of good looking shadows although it could have used a few cycler effects that effectively generated atmosphere in the original E2 levels. The level plays well although a few times you end up with too many bullets.

A part of the enjoyment consists of admiring the Lunar surface as you proceed. The action concentrates around a few central "Lunar yards", providing a good sense of progress. You're not really teleported off the area until the very end.

Conclusion: JFCBP2 ends up being a quite standard map. It was a conscious choice to keep the detail level at minimum - after all, 3DRealms levels weren't exactly filled with details. A fun - although a bit too standard - ride through a moonbase. 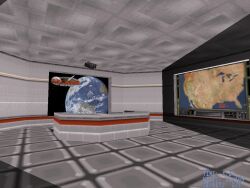 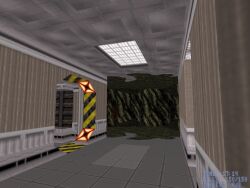