Description: A space/alien base level with some original stuff and decent gameplay. Should work with v1.3d. I would have appreciated if the author had written readme file in English instead of French.

Design: Mostly design is at least above average but there are corridors & hallways which are a bit empty. For example in the beginning you're in your spaceship which is a bit too tight and hallways are a bit undetailed. But mostly 'Invaders' offers you above average eye candy with some good outside sceneries & a gladiator area. Lighting is mostly good with some good cycler effects but at times it's a bit too dark.

Textures: Mostly episode 2 textures - especially E2L4 & E2L9. Set is quite green/gray and it works well - especially outside where there's a bloody red sky on the background. Use of lava textures as rocks in a couple of locations is quite good looking.

Gameplay: Mostly enjoyable but it could have been better. Puzzles are half key hunting half button hunting. However weapon/enemy balance is not so perfect. Now there are too less enemies & too less weapons. In the beginning you have to use your pistol too often. More enemies & especially more ammo would have been better. Some areas were also too dark - for example the nice looking hall with four alien ships.

Innovations: This kind of theme is not overused. There were also some outstanding factors here and there. Gladiator area was nice and the outside area with red sky & a flying alien ship was pretty neat.

Conclusion: Pretty long and good looking alien base level with some new ideas. Gameplay is mostly good but it has some minor flaws. 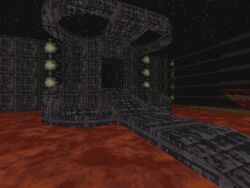 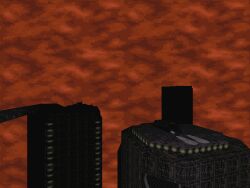