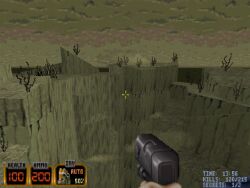 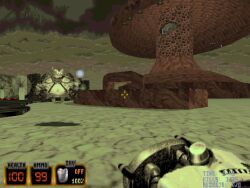 First of all I'd like to state here that I have a very short temper when it comes to games. Also - since I have played Duke3D for about eight years now I assume that I'm not a total n00b - however "Total Infiltration" was way too much for me. Not because of combats which were relatively well balanced but because of the flawed gameplay which got to me all the time - even more than it did during the suberp 'Oblivion' TC demo (and for different reasons).

The episode starts well - the opening level introduces you to the new world facing you in a smallish 'scripted sequence' with a great background track. But then...

The first two levels are 'of the lower Devastator' quality when it comes to design - however despite a few gameplay flaws they're still pretty enjoyable levels although the first level fails at least once because of its reactor-explode scene where an unaware player can get badly stuck because of a design flaw. "Jade Base" comes next which is a pretty nice level and and the second best of this pack - although the design is clearly worse than in the other levels included in the pack. However "Transport 2" ends it all - In case you haven't checked our lenghty T2 review then check it here. The level is extremely annoying and difficult. It uses unfair tricks to confuse & trick you (although most likely unintentional). In case you're lucky enough to get pass the first nine-button puzzle you're just about to experience a lot more. Going through a teleport takes you in front of a Battlelord - having little hp at this point will kill you without giving any chances to survive. The solution: find health, cheat or think of something else (and there are more locations like this in the level which require a certain amount of health - if you don't have the required health you just have to cheat). This won't be the end - Next you have to pick up a hand and take it to a certain place - great - but how in a hell are we supposed to know that? Or how we're supposed to even notice that we might have picked up a hand next to a bunch of body parts? And how we're supposed to know where to take it? And believe me - it won't stop here either.
The next one in line is the awesome 'ASS' which scored 93 here a while back. Although the level has its annoying moments it's certainly one of the most interactive levels ever with great action sequences & new tricks & ideas.
The sixth level - the one which has not been released as a usermap before - starts off pretty well. Your escape pod crashes to Earth in a nice action sequence. However the bad gameplay appears again once you get underwater. Shooting a massive bunch of grass just to get through an underwater passage is not my idea of a good gameplay - not to mention the pain if you're low on your Scuba Gear (if you even have it).
The last level is luckily short and good looking and is followed by a nice but small video clip.

All in all - "Total Infiltration" is an interesting pack of levels which is - in my honest opinion - ruined by horrible gameplay. There's nothing I can do about the fact that I wasn't happy when the whole thing was finished - I was angry and frustrated.
Just to be fair: Check "Total Infiltration" review at DN-R (links to review) since it got a bit more positive welcome there (well - ever seen DN-R being critical toward any level?)

Not included in the mod but a sure pick:
Aquatic Hive Score: 95
Alien 4: Resurrection Score: 92