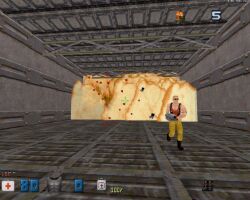 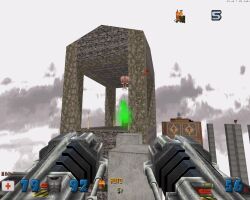 Description: Eddy, who's been active in the mapping scene lately, has come up with a Total Conversion, Infestation in Time which features lots of new hacks, monsters and kick-ass maps. There is a weak story that deals with time travelling. It seems to be just an excuse for having a wide variety of levels.

Review: There are 18 levels (three of which are secret) in two episodes and three more episodes for Dukematch (which I didn't try). As said, there's a whole bunch of different themes. You get space maps, city maps, medieval maps, hi-tech maps and so on. Some consistency would have been nice. Now you just seem to progress from one random location to the next without any idea of what you're doing or supposed to so. Some maps emphasize adventure - for example, an arctic map with lots of puzzles and traps - while others emphasize action - for example, a city map with airstrikes, turrets and big streets full of aliens. There's also the usual "Dream" type of map which is the most visually pleasing of the pack. There are three secret maps, one a Wolf3D remake, one Eddy's surprisingly fun first map and a "Sonic" map where you have to collect a hundred "rings" to continue. (In case you can't find the secret maps just use dnscotty to access them.) Level design remains above average throughout the pack although Conceptual Grandness seems to be a bigger factor here than tiny details. Eddy still has problems with lighting which is too modestly used. 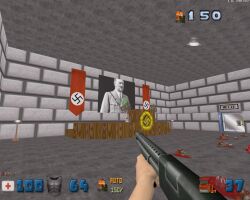 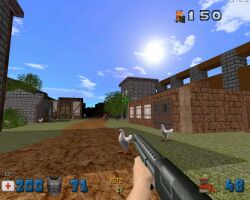 There are some new effects which in fact are getting old by now since they're mostly recycled from Eddy's previous projects. The problem with the new custom enemies is the same as before: the autoaim function doesn't seem to work against them. There's also a cash system where you collect money and buy weapons with it. The system turns obsolete pretty quickly as you start discovering more than enough stuff from the ground. While walking around the maps you get to meet some "civilians", which actually all seem to be Duke clones. This is better than nothing though and makes the levels seem less static.

Conclusion: A good two-episode single-player adventure but Eddy's hacks have gotten old. The bigger problem is that the two episodes lack consistency. A story that is explained as you move on and a more consistent map progression would have boosted the pack's quality. Variety is good but not when you seem to randomly jump from one place to another. 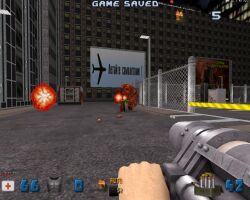 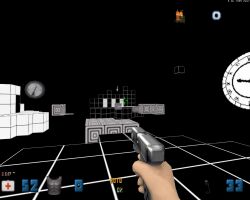