Description: A quite long arctic-hitech map with some "The Thing" references. DukePlus is not required as far as I can tell but using it adds snow.

Design: Playing this with the HRP causes some fps drops when you're outside but it looks a bit prettier. With DukePlus you get snow. The level is mostly well designed with attention to details and spritework, but sometimes it seems a bit sloppy. The main base could have looked better from the outside and indoor areas were bothered by cramped design. Lighting is average, some areas seemed a bit dark but I was playing at night so it wasn't much of a problem. There were also several bugs such as snow coming through sprite ceilings and one random sprite on the main base roof. The arctic theme is generally well used but could have used a bit more ambitious design such as a bit better terrain design.

Gameplay: The first part of the level, before you enter the main base, is a bit unbalanced. There's little health around while you face tons of Pig Cop Tanks, a Battlelord and others. An RPG and some more health could have balanced things out a little bit. There's a bit confusion first as to which direction you should go to - enter the main base or keep scanning outdoor locations. I liked the fact that there were two entrances into the base. There's one location that you don't really need to visit (and might miss anyway) but it has a solution to a multibutton puzzle near the end. Even though I found the location I didn't find the combination so I had to cheat to pass the multibutton puzzle. I don't think solutions to such puzzles should be hidden on the other side of the level.

Conclusion: Despite some obvious flaws Colossus is still a pretty good map. Design is above average and gameplay is pretty good once you get past the outdoor section. Prepare to spend around thirty minutes with this. 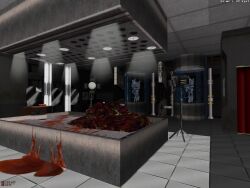 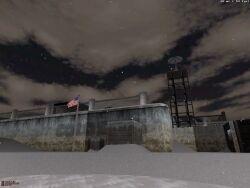