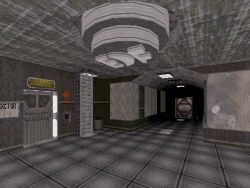 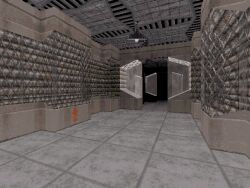 This is a six-level episode with some new stuff such as some new textures, sounds & a new shotgun model. The first level is a briefing level and one of the levels is a secret level.

Anyone who can read knows to expect industrial levels with hi-tech themes & such. Each level follows strictly the same style - The look of details is pretty much the same, the texture set is the same and the gameplay is the same in each of the six levels. This of course gets a bit boring - Industrial theme offers a lot of possibilities. However the levels are pretty good. They're detailed, they're pretty well textured and the gameplay is good. Shadows are pretty much where they should be (although they're very basic - they won't catch your attention). Some locations could use a bit better trimwork and spritework (flat sprites on the walls) is a bit too repetitive (as is the theme itself). The weakest part in this release are outdoor areas. The pack has a very few of them and they look very bad - mostly thanks to basic surroundings (high walls everywhere around you). There are also some other bugs which can be seen around the episode such as some of the textures on top of crates (I have no idea why this was never fixed). There are a lot of ambient sounds around the levels. They're well scattered and give this pack a realistic touch. Something else to complain: Doors could use some more variety - now they're all either lotag 20 or 21 doors. And then some of the vehicles look bad.

Gameplay is basic - key/button hunting. There's no storyline to follow (exlcuding a few viewscreens with some simple messages) except the one in the readme. But the pack is still entertaining - there are a lot of monsters to kill. Some of the combats got a bit tough which spiced things up a bit. In the end you might easily run out of shotgun & chaingun ammo which makes things even better & more exciting. Levels are quite big so you'll be killing & travelling a lot. And those who like to explore might want to take a careful look at the levels since there's a secret level waiting for you (a good one - that's why it's a bit shame that it's a secret level). The bossfight in the end is a bit too simple and easy.

There's some new stuff such as some new sounds (a few ambient & weapon sounds), some new textures and a new shotgun. New sounds & textures are pretty good and fit to the theme. The new shotgun model looks & sounds very good. But something is missing - the pack definitely could have used a new ending screen. Now all you'll get is that same old Battlelord ending animation. There's no real closure.