The Review: Oh look, another E1L1 remake... Well, it doesn't take long to figure out this one is quite different from your average remake (if such a thing even exists). A version of the map was originally released back in 2013; it was a DukePlus map with heavy Polymer lighting, which basically made it off-limits (hell, even my current rig can barely run it, while Cyberpunk 2077 at ultra settings yields around 100 fps). This new version is a "standard" limit-breaking EDuke32 map - and it's drop-dead gorgeous. It's hard to impress me these days with detailing, but this one is really something else with its every nook and cranny teeming with impressive and creative use of textures, sprites and details (my favorites; a Stratocaster-like guitar and a construction site crane). There's so much detailing all over the place in fact that you'll find your surroundings often downright congested with some detriment to the gameplay experience. Plenty of the detailing is beyond the gameplay area; this causes some annoyances, as the invisible walls and artificial divisions easily come off as a bit obnoxious. Sector-based lighting (especially of the "strong" kind the original maps are known for) tends to be harder to implement in highly-detailed maps, but here that's compensated with abundant spotlights and eye-catching use of red lighting, resulting in some rather dramatic-looking visuals. As for gameplay, so much of the map takes place in the main street area that the map has to rely a lot on respawns. Some of these are of the "in your face" and a few of the "right behind you" variety. I don't think this does the gameplay many favors (not to mention it's always a bit immersion breaking), but admittedly there were a few cool combat setups achieved with respawns. I also would have toned down some of the timed explosions that can really hurt you at random. Puzzles are rather typical, but there was one bit where you had to climb an elevator shaft and a network of vents that I enjoyed (although it could've been a bit more spacious), as there's nothing worse than x-axis monotony. (There's also some duck hunt secret in the map, but apparently I couldn't find all the buttons even after going back specifically to find them, so no comment on whether it'd have been worth the effort.)

Conclusion: As a remake the map doesn't really venture much beyond recreating the first rooftop and the general shape of the main street area; this is more "inspired by" than a remake. But that's only a good thing, as map remakes have never evoked much interest in me. Design-wise this "Street part remake" is truly a stunning piece of work. Its gameplay has many good things about it too, but also quite a few annoyances. Overall, definitely not a map you want to miss. 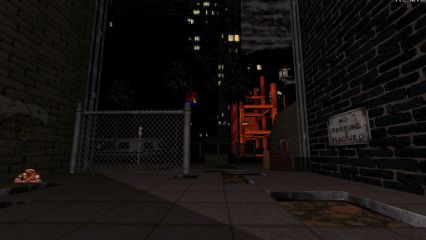 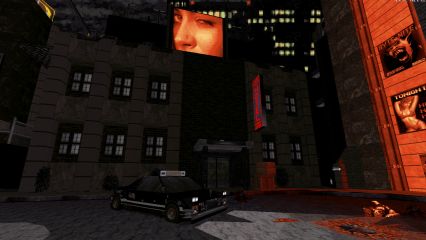