Description: A small DukePlus hi-tech map from the guy who made all the best SST TC maps. Duke needs to infiltrate and destroy an EDF troop carrier.

Design: Quite often "clean" design with huge rooms means empty design (or "crappy maps" to put it bluntly) but Salacius once again demonstrates how he's a master of combining clean level design with open areas. Texturing plays a huge role here and Salacius's choice of grey textures makes you wonder if you're playing a sequel to Voices of Authority. Instead of filling every bit and piece of the map with tiny details, Salacius has given his map a functional, modern look that could be called "majestic". There's also some impressive terrain design before entering the base.

Gameplay: DukePlus was one of the reasons that drew Salacius back to mapping. The map itself utilizes a few of its features such as jump pads and the skycar (although only for a few seconds) but the thing that most keeps reminding you of DP are the akimbo pistols with which it's always a pleasure to take down alien troopers. The map is short, a six-minute ride to be exact and pretty straightforward in terms of puzzles. 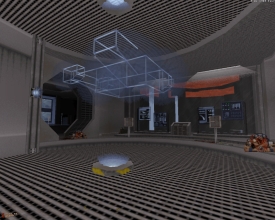 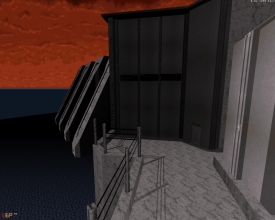