Description: A city/park map from the author of "War Pigs". It's pretty big and requires Jonof (breaks the old sector limit).

Design: The name might be a bit misleading. The level is a mix of park-temple & city theme. One big street section is dedicated to standard city stuff while the rest is set in a park/temple. A few locations could use more details - mostly indoor areas & such but especially the park and the caves & temple hallways surrounding it are neatly detailed. Lightning is mostly very good. The buildings are pretty basic squares but still good looking thanks to texturing & alignment.

Textures: Basic texturing with some standard city stuff and a good use of E4L4 set for the temple parts. The street area looks nice with the red dusky sky and edges have been well trimmed.

Gameplay: Just like "War Pigs" this one's too quite long and well balanced. You'll face many Battlelords, Commanders, Protector Drones and Pig Cop Tanks - my guess is that you won't always have enough ammo for the RPG to deal with these guys. But there's enough health & other weapons to keep you alive. Puzzles are simple - just buttons & keys. One button puzzle might be a bit tricky but I was lucky and got the combination right immediately.

Conclusion: Well balanced fun for a bit more than 20 minutes. No superb details or grand constructions but the design still remains clearly above average at all times. 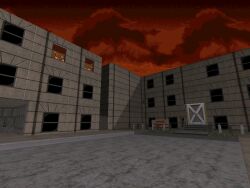 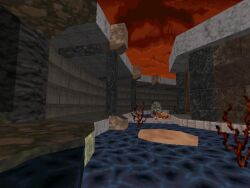