The review: Noises near his apartment make Duke rush the shit he was taking in the bathroom. Itīs the aliens again, and Duke's ready to fight them! Galbadia is an unlinear city map made by Methy, Mikko Sandt, Steambull and MRCK. They've joined forces to pull off this map that seems to have been in development for at least six years. As such, the map has its spikes in design, but considering the differences between the authors' styles, it's quite coherent. There are a few deviations from what we could call typical city locations as the story involves a secret alien hive built within the city. The map is made of tidy construcion, good lighting, good color choices, funny jokes and, of course, some lovely and original locations (not really surprising considering the staff). Effects have also been very well applied.
Gameplay involves unlinear keycard hunting, some switch puzzles and combat in open areas where strategy is always up to the player. Nothing is particularly difficult - until the drones wake up. There's more than enough ammo & health. However, there are a few progress-breaking bugs that should have been taken care of. So, my advice is to keep a finger on the quicksave key.

Conclusion: That refreshing feel of playing a rather classic map is so scarce these days but it's strongly present in Galbdia, a twenty-minute map with no hassles ahead, good design all-around, strange music choice and plenty of monsters to shoot at. 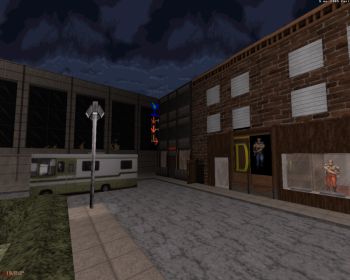 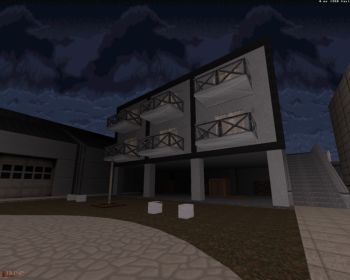