Description: Supertanker, the author of Aqua Base and Lunar Base DQN1925, is active again and treats us with his second space map. "FOS" is a small to medium-size space map.

Design: This is kinda like Mortal Shock in how it takes its theme from Lunar Apocalypse but without making the map seem a part of that episode (compared to, say, FM2X which could have been an alternative second episode). FOS is more generic than Mortal Shock (which featured a bar, a pool and several other non-generic locations) but its design is constantly above average. There are several locations where lighting is on par with lighting found in 3DR maps. I also liked how Supertanker didn't end up making some of the vents the easy way. Attention has also been paid to how the station looks from outside.

Gameplay: I played the map several times and a lot depends on how enemies drop ammo. S3 is more challenging than S2 but neither is too difficult. In fact, on both skill levels the first location is perhaps the toughest since you have to deal with several enemies with just a pistol. You won't face anything tougher than a Commander but there are several locations where you have to fight a pack of monsters. Enough health is provided to keep you alive unless you're not a total n00b. While most of the map is keys and buttons there are several scenes every once in a while that should keep you interested.

Conclusion: Supertanker has clearly progressed. FOS Station is far more consistent than Tanker's previous releases and it's a fine way to start a serie of maps. The map should take you no more than ten minutes and, if you're like me, you probably want to turn the midi off. 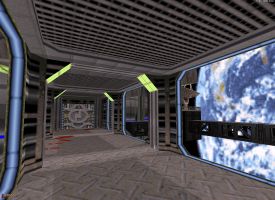 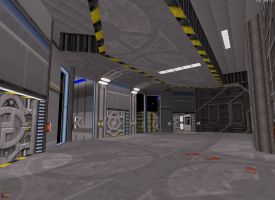