The Review: While Quakis has remained an active mapper over the years, it's been a very long time since he last put out a solo Duke3D project (thus not counting our epic collaboration). In The Flaming Shipwreck Duke is sent to England to clear a local, pirate-themed bar of the alien scum. The map is a work of stunning quality when it comes to detailing. Quakis hasn't been wasting time during his time off from the public eye but has instead focused on honing his skills, effectively leaving his BobSP roots behind while learning from the likes of Pascal Rouaud. At the base of this style is the creation of new "assets" by combining plenty of old ones in novel ways. In the Flaming Shipwreck you'll be stopping at every turn to look at all the nice little details Quakis has come up with. The bar's cellar section is an interesting contrast in being more spacious, polished and clean, making more economic use of the game's resources: This is the kind of design we saw in the new sections of Done & Dusted. Unfortunately, the map is a bit glitchy at times with its complex spritework, mirrors, and, most regrettably, can be demanding on the framerate from time to time. As for the gameplay, the map is quite stingy with ammunition for the first few minutes, and remains somewhat challenging throughout. It is always fair though and you're basically forced to use even those weapons that may not be your favorites. There is also less emphasis on the usual keycard & button hunting and more emphasis on free exploration but without throwing the player off course. At its core, however, the gameplay is the most traditional thing about the Flaming Shipwreck. 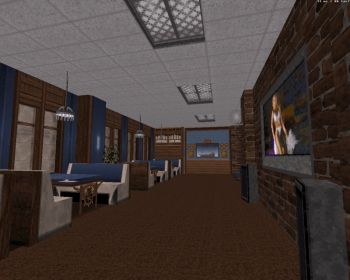 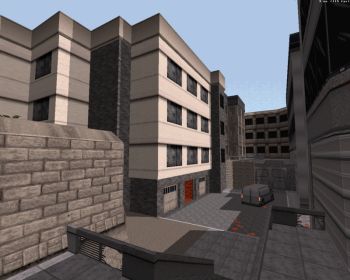