Description: Another Roch-type city map from MRCK with some innovations and standard gameplay.

Design: As said MRCK has always been influenced by Pascal's Roch serie and this time those influences are even more present than they were in his Anarchy City serie. Style is very similar to MRCK's previous map for the Spiegul Contest. "Filler" is however a lot more open level and the buildings are clearly taller than in most of his city maps (which remind you more of a suburb than of a big city).

Textures: This is the area which has been mostly influenced by Roch maps. There are many different and new combinations which are nicely mixed together creating something new (although it's hard to take it as something new after playing zillions of levels imitating the same style). It succeeds for the most part but also fails when it comes to some trims and flat doors. I liked the way the "Bad Religion" and "Rural Nightmare" signs had been made.

Gameplay: It got a bit tough at times. I'd have wished more health spawns during each monsterspawn. During the last street area after getting the red key I just ran to the end instead of fighting against a massive group of monsters. Monster/ammo balance is good. A blood vessel in my brain almost popped during that jump scene near the end (destroyed building). I failed to see the point of decreasing the speed of some of the elevators the level had - it was just a pain in the butt but didn't really matter - it's only maybe two seconds of your life. All those zillions of unopenable sprite doors around the map did start to annoy after a while.

Innovations: Mostly texturing along with the Bad Religion sign and other similar effects. The level also recycles the nice trick from Rural Nightmare where someone "hands" you a key card when pushing a door.

Conclusion: City goodness in Roch fashion for about twenty minutes. 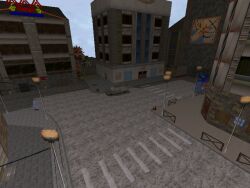 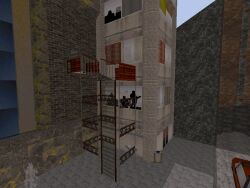