Description: Vector's first completely new level (the old one was an extension of E1L1) is a factory where gameplay weights more than design.

Design: There's a satisfactory amount of details - it's not seemingly BobSp or Ale influenced but looks good enough (besides - the author was hit by the old sector/wall limit). Texturing is ok with okay trims. Atomic hi-tech textures are well used but the map a bit overuses the "bathroom wall" texture (it's not as bad as it sounds). The scale is big - the hallways are huge and there are hardly any cramped hallways. Lightning is average - nothing that would get your attention (neither in a good nor bad way).

Gameplay: The map is somewhat huge. While most maps take 15-25 minutes this one went for 30 minutes. You're bound to get lost because of the level's unlinear nature. It's not frustratingly hard if you know where you're going (and monster/ammo balance is good - I didn't die but I wasn't venturing with 150+ health all the time either). Just pay attention to any viewscreens you might find. The map leans toward a mission-oriented gameplay. You have to activate some pumps which works pretty damn well. Sometimes I wasn't entirely sure how the buttons I found affected which created a bit of confusion. There's a good build-up in the beginning where you have to activate the factory electricity. There are also some keys but two of them are unnecessary (I did find them though).

Conclusion: A good mix of slightly above average architecture and excellent gameplay. Thanks to the way it's been done the factory really seems to come alive. 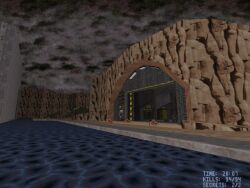 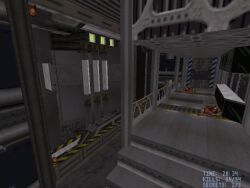