Description: Juha Laaksonen scored 82 with his previous level 'S-A' which was released over two years ago. In two years Laaksonen managed to build a beautiful & large city level.

Design: 'Extermination' is influenced by a set of good city maps including Pascal Rouaud's Roch serie and many original Duke levels. Design is very close to original Duke levels - the only difference is that this one's bigger. All available sectors have been used. There's a lot of variety - flooded basement, large streets, skycrapers, sewer, alien hive/cave etc. Each part feels different. Shadows are excellent - They're used often and in realistic locations. Level has a nice looking car and one damn good looking unreachable city scenery.

Textures: Typical city texture theme with lots of 1.4 textures. Nothing outstanding or new has been invented and that fits as this level follows the original Duke city style. Cave textures are well used to give some depth to that huge underground sector. Red dusk sky allows nice use of evening lighting.

Gameplay: Lot's of normal puzzles with over three keys and multiply locations. Difficulty settings are very well set. Easy and normal skill levels are pretty easy but harder skill levels will make battles tougher due to lack of ammo and health. And if you want more challenge there's a nice battle for you in the end. And if you don't then you can just hit the nukebutton.

Innovations: Nothing outstanding as this is a normal city level but there are pretty interesting viewscreen messages and one nice explosion sequence. You can choose between two endings which is not an usual thing in Duke levels. 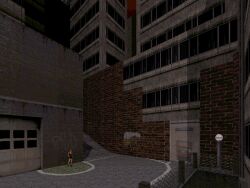 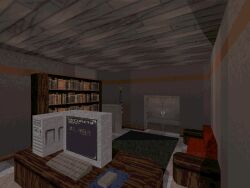