Description: NerdKoopas second release (see his previous map) takes Duke to a small segment of a city with streets, rooftops and sewers.

Into it: A bit surprisingly not many people release small maps, focusing instead on more ambitious projects that never see the light of day anyway. Ethanol Fever is even shorter than NerdKoopa's Elements, taking around five minutes to run through. The map is also totally nonlinear: A basement-level room has three locks and the keys to them have been scattered around the level. Besides streets, alleys, rooftops and a restaurant there's also a cool railway bridge that casts a shadow on the main street. Design, particularly lighting, has clearly improved since Elements, even though the theme is totally different. Gameplay too is a bit more lively now with some tougher fights around the main street area. You probably won't get lost trying to find your way around since there should always be a few locations you made a mental note of earlier but didn't visit. Several areas are totally optional, even useless as there are easily more bullets than there are enemies, no matter how much you suck.

Conclusion: A nice little map with many ways to play it. This nonlinearity should encourage you to replay the map a few times. While Ethanol Fever is not very ambitious (you can basically finish the map in just two minutes without even trying), it excels in its own right. 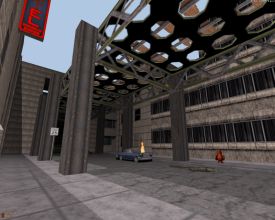 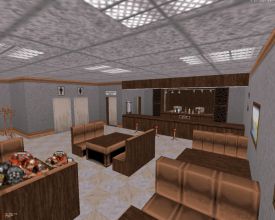