Description: Another SST TC usermap from SalaciusCrumb. Your mission is to find out what's going on inside a crashed vessel. You'll need SST TC to play this level. Link below.

Design: Highly detailed with lots of huge areas and spritework. Like 'Before The Storm' this one also has huge areas - fully detailed. The vessel looks brilliant when you're on the outside - Snow is falling, fire is burning and the brilliantly textured vessel just stands there - quietly. The level only has 2˝ floors and some caves.

Textures: Just like 'Before The Storm' this one comes with a gray/white/black set of textures. The outside area in the beginning is covered with snow and inside of the vessel is mostly dark & gray. SST TC has excellent textures and they're well used in this one.

Gameplay: Once again the enemies are well placed. You'll face mostly Hopper Bugs but there are some Warrior Bugs near the end as well. However the gameplay is not as intense as it was in 'Before The Storm'. Also the level is a lot shorter than Before The Storm due to massive amount of details. When I entered the caves I thought that I had completed about a half of the level and that more fights would be waiting for me - but then it just stopped there in the caves. Also this one is less mission-based level than its prequel.

Innovations: There isn't anything outstanding - of course the theme and style gives this one a fresh feel so it's not like any other level out there. Well there's one door which breaks the barrier under it;)

Conclusion: Extremely detailed level with a few intense combats but is too short and not as surprising as its prequel. Still a good part of the serie which hopefully expands in the future. Download SST TC here. 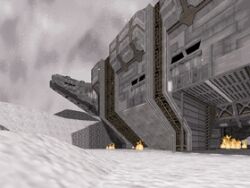 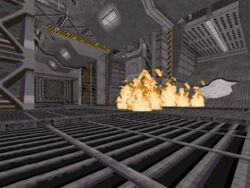