The latest map from Quakis is a good reason to try Fakir's mini-mod in case you haven't done so already. Whether the level is worth reinstalling the whole thing just so that you can try the level is up to you.

"Enlighten" offers nothing new in case "Army of Death" is still fresh in your memory. Lots of both outdoor/indoor action in Fakir's medieval playground. With excellent textures from Shadow Warrior the nature looks very pretty - as it did in original AoD levels. It has been well detailed although some of the rocks surrounding the map could have been sloped a bit more. Lighting is also a bit poor - the outdoors could look fantastic with some shadows.
Indoor areas are also similar with the original maps with some huge hallways, libraries and rooms. Nothing new, innovative or grand but it's still okay stuff. Texturing is good and there's a decent amount of details.

Gameplay gets boring - which is of course due to the concept of the original "Army of Death". It's all about throwing dozens of weak skeletons at you. They attack in straight lines and die easily. Rooms are filled with them. There are no explosive weapons - only the first four weapons.

Try it - in case you haven't tried the grand "Army of Death" then try it too - definitely something interesting in case you're not familiar with it. 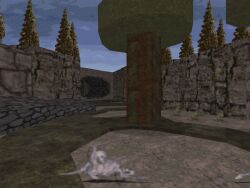 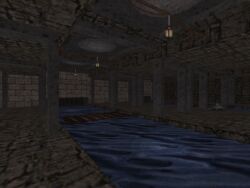